So it’s Mental Health Awareness Week this week (w/c 14th May 2018). The week where suddenly mental health is in the spotlight of the UK for a week, a lot gets said about what is apparently going to happen, what will be done etc, sadly this tends to be forgotten about as soon as the week is over. However I do think the tide is slowly turning in terms of recognising mental health and slowly the stigma of having a mental health issue is decreasing. Acceptance is slowly growing, which is awesome but it needs to be pushed constantly up the agenda.

We should be aware of mental health all the time – ask your mates if they’re okay, cos you know it’s okay to say you aren’t okay. It’s not a stick people should be using to beat others with.

Mental illness is real,just because you can’t see it doesn’t mean it isn’t there and the suffering isn’t there. It’s there like a shadow on a sunny day, constantly nibbling away at you. In my own case, I have days where the anxiety is like a tiny itch that I am able to ignore and deal with. Equally though I have days where anxiety and indeed depression are sat on my shoulders like 50kg weights, unrelenting, or like the constant itching you get on your foot sometimes, where I just can’t ignore it, and usually ends up in strong emotions and a feeling of constant anxiety, I can’t settle and feel constantly on edge.

I think it’s important that we remember that we all struggle at different times and at different points in life. 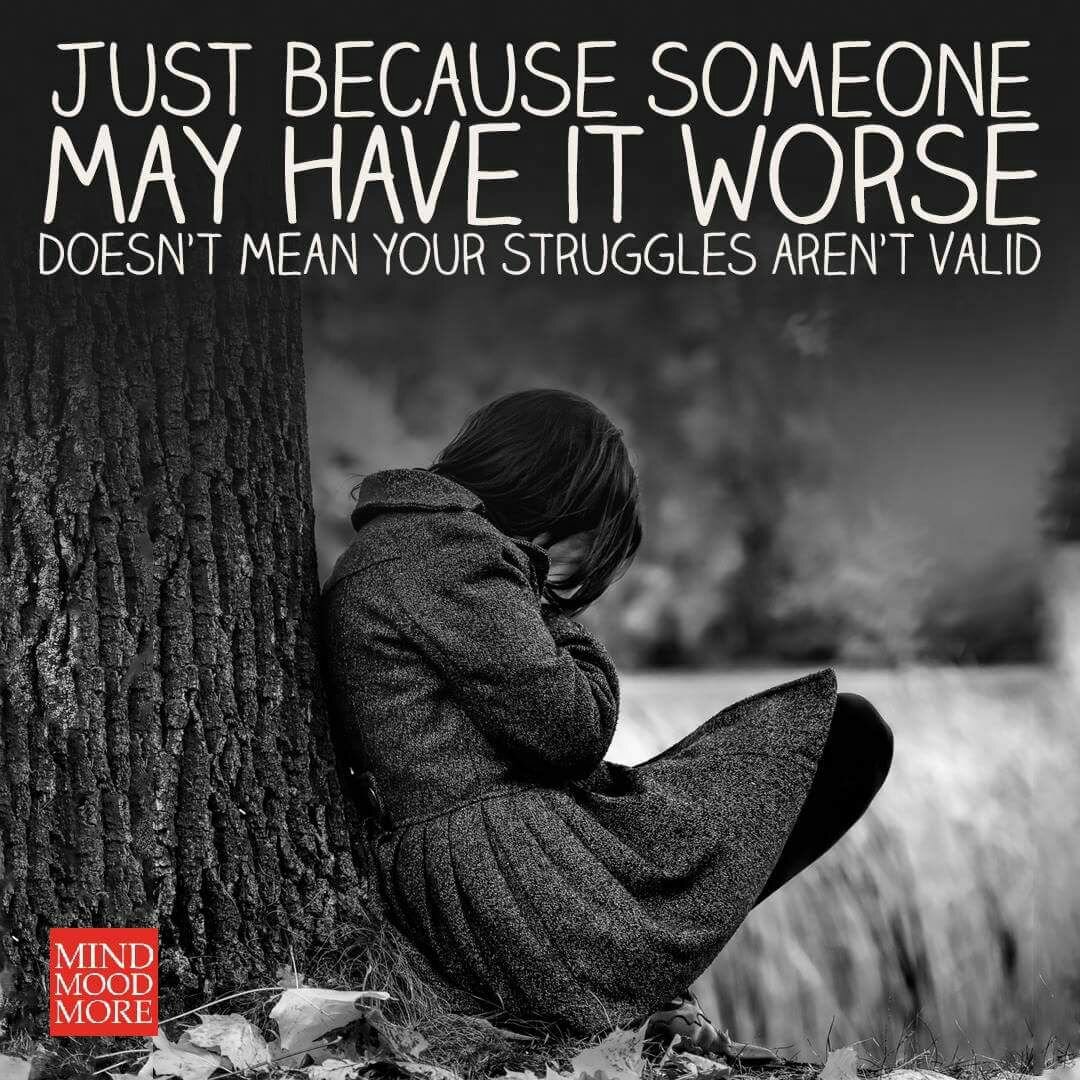 I also think it’s important that we talk about mental health and our own personal experience with mental health. It makes you feel like you aren’t on your own in the fight, okay, so we don’t feel everything exactly the same but some things we might. For example I get anxious about messing up at work, I fear failure, I like routine and to know what I’m doing in advance, and keeping busy distracts me from my anxiety. When my anxiety cranks up, it’s debilitating, but I can usually still function (hence the title of this blog), and stick on the old “I’m fine” mask, hiding the palpitations, hyperventilating, inability to make eye contact with anyone, and the constant doubting myself, and probably the most frightening part of a panic attack and high anxiety levels, being the depersonalisation aspect, where I can almost ‘hear’ my own thoughts and sort of feel like I’m observing from afar and not in my own body, that I’m watching myself, with the only outward sign being me being more quiet than usual. The anxiety never fully leaves it just lies in a semi dormant state where it appears to be hardly noticeable but I always know it’s there.

Also we need to understand that just because you or I have X Y Z and somebody else only has X or Z doesn’t mean their suffering means any less or more, all our struggles are valid.

It’s important to listen to others struggles or even just check they feel ok. Use your friends or family to talk about it. Please don’t struggle in silence.

I suppose it’s up to each individual as to how they approach prevent if they approach their boss about their mental health. However you should know (I was told this by my boss) that by law, employers cannot discriminate against you for mental health issues. Ideally no-one should be frightened of talking to their boss or employer about mental health issues but sadly it isn’t the case. Personally I was anxious and scared of telling my boss about my anxiety, perhaps irrationally, such is the way my anxiety is, but sympathy and understanding go an awfully long way to ease the anxiety.

Okay, so not sure how many people have been reading since I first created this blog, which also doubles as a therapy for me, but a quick overview of my story for Mental Health Awareness Week…

I’ve always been a nervous/anxious person I suppose, and I was pretty shy as a kid. I had (and still get bits of) depression about 5 years ago, triggered by a bad spell of injury , which was a narrowed nerve opening in my back and was horrifically painful, I found I had a lot of time to think,too much time if you like, then the year after I had major surgery to reconstruct my jaw, which obviously was a massive life event for me and took a long time to adjust to. Also I had been bullied throughout school and college because of my teeth and glasses and it did take its toll. I lost both my grandparents that I knew at age 11, which to be honest was massive as they were both a huge part of my life and massive influences on me, even now and it was just before I started secondary school. I wasn’t a terribly confident kid apart from academically and I still struggle with believing in myself and backing my own skills. Fast forward to 2017.

At the end of 2016 I’d been enjoying my rugby playing for Wakefield. But things started to slowly turn. I was told “don’t let me down” by my coach before entering the fray, then I was accused of various things including, a poor attitude (HA!) not being aggressive enough ‘in the right way’ and apparently causing drama. I admit one of the ‘dramas’ was my fault but absolutely nothing else. Things started to change at training , I was treated in a different way, second class, unbeknownst to me I was being psychologically bullied and manipulated, praised on one hand, rubbished on the other. It reached a point where my anxiety started to become apparent, but I didn’t really recognise it was happening, imagined it wasn’t there because I didn’t want to see it I suppose. I’d had enough of playing teeny tiny parts and criticised for no reason and vented to someone I thought was a trustworthy reliable person. How wrong can you be.

Soon enough all of what I’d said plus a massive twist on my words (yes I shouldn’t have said it but a hell of a lot was the truth) found it’s way to said coach. I was in the lab at uni that day and I came out to a missed call and voicemail. From her. This was the moment I had my first major panic attack. Stomach dropped, palpitations,real fear and panic , shaking sweating full blown depersonalisation, thought I was going to keel over. I suppose also I still thought I had a future there. However she talked at me that night on the phone for half an hour. Over the next few weeks I finally saw sense and quit. Not before I’d had several more panic attacks and severe anxiety but was still able to function by going to uni etc. I went on citalopram at this point, which was amazing frankly. I had a ‘freeze’ panic attack in a lecture triggered, I think by my own panicked thought process. When I said I’d quit to her, it was like a massive weight lifted from me. The panic attacks and anxiety did slow down in terms of frequency but the intensity took a long time to decrease. Even now they are still there.

Approaching the end of 2017 I finished my thesis and absolutely bossed my thesis defence despite a small panic attack beforehand which I was so bloody proud of, did my exams in the resit period, smashed them too. I got a job at uni just after my masters finished as a lab tech, as well as my ambassador job which I loved. Seemed to go well until out of the blue 2 weeks in I was asked to leave as communication issues arose with nothing being my fault.

Fast forward to now. Enjoying my new job, anxiety seems stable at the moment, and learning new ways to cope with my demons.

Hey I survived all that, and for everyone struggling – you’ve survived 100% of your hardest days already, keep going ❤

Guess what I’m trying to say is that maybe sometimes awareness is about realising that hey you’re a little bit fucked up or fucked in the head, and that’s okay

This site uses Akismet to reduce spam. Learn how your comment data is processed.