Now I’ve read recently that being more anxious could mean that you’re more intelligent and more creative. That’s very interesting, as using myself as an example, I don’t think I’m really that creative, but I can think outside the box to solve things (this is not a CV haha). Now in terms of intelligence, I feel a bit big headed, but no-one else will blow your own trumpet for you will they? I must be at least a bit intelligent to have a BSc (Hons) and an MSc! And also to have got into my current job! I’m not naturally someone who goes out and boasts that ” I know x y and z” , I’d rather just quietly get on with my work showing what I know and what I’m capable of and not being afraid to ask questions, and having a good relationship with people I work with but obviously knowing where I should draw the line. Sometimes I find it really difficult communicating in terms of my short attention span thanks to anxiety, temporary depersonalisation and mind wandering, like my brain wanders off when I’m meant to be listening or in a meeting no matter how hard I try to prevent it. I find that listening for key words does help and brief notes while the instructions are spoken also help. Also…and I absolutely fucking detest this part of anxiety….. The constant need to apologize!!!! Aaaarrghhhh it’s so fucking annoying!!! Also awkward silence is terrible as though it’s my fault even though it isn’t. But when I’m switched on and focused I’m almost a different person. Something else that I used to struggle with was taking any kind of criticism – I used to go in a bad mood or get upset even if it wasn’t huge – I used to take it all personally. Eventually I learned mostly to not take most criticism to heart because it seriously isn’t worth working myself up over.

Today at work started off ok, but then for irrational reasons, just cos anxiety can, I started to have a bit of a bad anxiety day. Now this time I just went quiet and didn’t talk much. I may have been a bit short with people and I take full responsibility for that. You don’t however realise how much effort and energy anxiety takes out of you every day even at a base sort of level , but considerably more when itsbad. Some days I’ve been at lunchtime at work and a tidal wave of tiredness will hit. Usually it’s when I’m on the train home from work I’m fine ish, then BANG I’m absolutely fucked. I literally have zero motivation or energy. On the upside some days the tiredness is manageable.

As I’ve mentioned previously, if I know what stuff I have to do at work etc I’m usually alright, but it’s when I have not much to do that I have too much time to think which anxiety takes as it’s cue to chime in!

Emotionally it’s a bit of an odd situation, some days I feel every single feeling so strongly but others I either feel numb or very detached like I’m not part of the room like I’m watching and not actually there. This is something that is annoying and frustrating to deal with and of course being a woman, hormones come into play too which of course is REALLY helpful…

Speaking of hormones, I’ve previously spoken about PCOS, or polycystic ovary syndrome. Basically in a nutshell,I have lots of teeny cysts , or follicles growing on my ovaries, and as well as that my hormonal balance is upset. So the hormones that control hair growth, particularly facial hair , are a bit fucked up.. so basically I can grow a beard to rival a few blokes, and due to my albeit lovely dark brown hair colour, you can see it absolutely miles away if I let it grow longer than a week. Obviously this really upsets me and pisses me off – it makes me feel less of a woman and of course anxiety chimes in at this point saying things like ” they haven’t got beards why have you” and ” they can see your beard miles away you look like a man” which is great of course. My sense of humour is particularly useful here! PCOS is pretty much a sucky horrible fucking thing and god my hormones are horrendous – I used to be on ‘the pill’ and I was basically a psycho! Even now I sometimes combine mood swings and irrational anger anxiety and a small shit storm can happen, fortunately this doesn’t happen too much…

Having anxiety seems to be a consequence of being intelligent – intelligence can mean being smart in a number of ways not just the classic I did well at uni etc.

Saw the quote ” Anxiety is the shadow of intelligence” and it definitely seems accurate. It’s like a punishment for being smart – to do with the way my brain is wired up and using more of my higher brain functions I think plus good old hormonal and chemical friends to spice it all up.

Sometimes I have days where I feel so flat even though I have managed to do a lot of things. It’s almost like the anxiety says….well you didn’t get much done really did you? Could have done more if you hadn’t been slacking!

Days like that really end up fucking ruined because of anxiety. High functioning anxiety like mine is really annoying because your brain is going 900 miles an hour and the rest of you can’t keep up, you fight to try and stay in control but you eventually fall behind. It makes you feel like you can never rest , you always should be doing something and if you aren’t you’re failing according to anxiety. In my personal anxiety ridden experience, which unfortunately reared up again recently at work , I need to keep busy, even if it’s just cleaning something like a really mundane task, I normally need to be occupying myself to stop the anxiety rising up to an unmanageable level , particularly occupying my brain with something concrete to do like following instructions. I need to keep my mind stimulated to distract it from anxiety’s clutches. In the same vein though I have to balance the doing and not set myself too much to do as the anxiety whispers in my ear ” you can’t do this you’re a failure” ” why do you bother trying “. It’s a rock or a hard place.

But somehow I stay fighting and stay strong, well I try to. It’s exhausting though fighting day after day and gearing up for the battle especially when you wake up and know it’s going to be what I’ve called a ‘bad anxiety day’ which pretty much means I don’t need any trigger to start the anxiety off from its low, sat on my shoulder, whispering level, it already starts with the talking louder. On these days, triggers tend to push me over to the anxiety attack edge and I just want to hide away. Work haven’t seen me on a really bad day yet however, I know I’ll get full support.

I think I’ve said it before but anxiety is a part of me now, probably for the majority of the rest of my life, it’ll be there, so in a way I’ll never be alone. However I think anxiety has given me a frankly brilliant/dark sense of humour which does help me deal with the shit I get thrown at me from anxiety itself. It’s a good defence mechanism at the least.

Many people have said to me that “you can’t tell you’ve got anxiety” thing is, you can’t tell unless I actually say it directly to you. This is because over the last couple of years I played rugby which has played a big part in my personality changing from a shy lass to someone who stands up for herself and can be hobby where needed and not afraid to talk to people and make conversation and debate or discuss important stuff. I don’t play anymore because well… stuff happened which I won’t go into because there’s no point, but what it gave me is amazing and belief in myself. I allowed myself to have passions for things, which paid dividends in my masters year. Basically I came out of my shell and there’s no danger of me going back in. Despite sometimes appearing massively confident in myself, which I won’t deny I have become a lot more so in the last 18 months, I do have a lot of moments where I hugely doubt myself and literally just have to wing it.

Blogging has got me thinking as I’ve found writing down my feelings really therapeutic, but other than that colouring is pretty calming and music most of all is something that calms me or at least allows me to sing out how I feel especially with some of the lyrics. 2 songs that really get through to me are ‘Heavy’ by Linkin Park and ‘Demons’ by Imagine Dragons. If you listen to the lyrics it’s a pretty good insight into me at my worst. On my worst days just want to shut myself away from life and talking to anyone, but I still force myself to go to work. On these days I just try to get my head down and focus on what I’m doing and hope I don’t have to speak to anyone, luckily my boss ‘gets it’ and gives me space or support. People like that are absolute diamonds.

So this photo is what I look like beard wise, ah the everlasting battle with PCOS. I hate looking like this as I feel like a man.

So I found this today thought it was pretty apt. 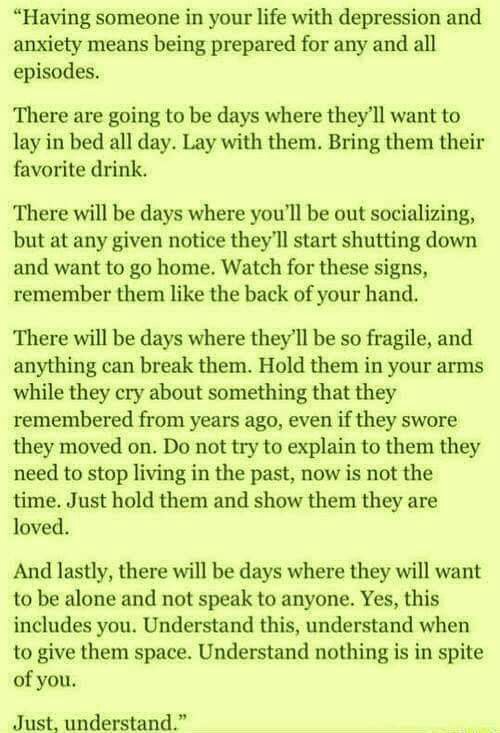 I haven’t seen anything that explains ‘it’ this well. So please think about this if you’re affected by anxiety or depression (I also have SAD so loving the cack weather!!)

Lastly I have decided on a potential graphic for my next tattoo – it’s going to be a face which is half human and half demon to represent my inner demons with the lyric “don’t get too close, it’s dark inside, it’s where my demons hide”. This has potential to be extended but I’m not sure yet.

One thought on “Meh.”

This site uses Akismet to reduce spam. Learn how your comment data is processed.